Society of the Spectacle by Guy Debord with a new and unauthorized translation, voiceover by Paul Chan (2013) 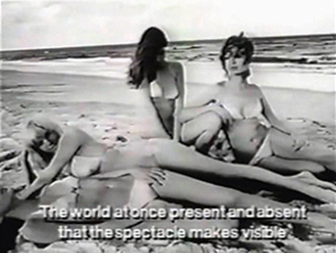 In The Society of the Spectacle (1967), the French intellectual Guy Debord (1932–1994) proposed numerous short theories, harshly criticizing cap­italist society. In 1973 he made a film of the same name, in which he added voiceovers of quotations from his own book as well as statements by other May 68 intellectuals to a visual collage of political events, such as John F. Kennedy’s assassination or the Hungarian up­rising. Paul Chan adds his own voice to the film in the form of a new, unauthorized translation that was initiated by Ed Halter, Thomas Beard, and Buyoung Kim from the Brooklyn-based film and video venue Light Industry.